CO2 Tax as stimulus in the growth area of electric mobility

The newly implemented CO2 tax introduced at the beginning of 2021 is aimed at accelerating the transition from conventional fuel input to energy transition (‘Energiewende’) technologies. A recent EUPD Research study shows that 28 percent of private households have dealt more with the topic electric mobility since the tax had been announced. So far, only one fifth of surveyed households are familiar with their energy suppliers’ activities in the area of electric mobility.

Bonn. According to the Federal Office for Motor Traffic, electric mobility continues its growth path in Germany showing no signs of slowing down: 30,101 new registrations of electric passenger cars (BEV) in March 2021 make up 10.3 percent of all registrations.[1] In contrast, fuel costs for passenger cars with gasoline or diesel have significantly increased with the start of 2021 because of the introduction of a CO2 tax. Another increase of the CO2 has been determined until 2025, though an additional increase of costs is to be expected in the following years.[2]

Bonn-based market research and consulting firm EUPD Research conducted a recent survey among German households in the context of Energiewende Award for energy suppliers. Amongst others, the survey explores how the new CO2 tax affects investments in electric mobility. The first level of the newly introduced tax alone has led about 25 percent of the 504 interviewees to deal more intensively with alternative drives based on electric or hydrogen. The majority of German citizens cannot provide concrete information as to how big the CO2 tax must be in order to consider investing in an electric vehicle. The majority of people in the group of surveyed households that did specify an amount of surcharge for gasoline and diesel, named 30 euro cents and more. While defined growth path plans for a surcharge of 15 euro cents per liter gasoline by 2025, 30 euro cents and higher are more likely to be expected from 2030 onwards.

Energy suppliers play an important role for the energy transition (Energiewende). On the one hand, they have established end consumer access with respect to energy topics. On the other hand, the energy transition creates new sales markets and business opportunities for utilities. Despite the strong market growth, the activities of energy suppliers in the area of electric mobility are only noticed by one fifth of surveyed households. When it comes to what end consumers perceive regarding e-mobility offerings, ‘wallbox’ and conventional electricity tariffs for the specific group of electric vehicle drivers are at the top of the list. Energy suppliers’ funding programs for private investments in wallbox or electric vehicle is known by just six percent in this target group. Survey results also show the lowest awareness for energy suppliers’ special electricity tariffs for mobile EV charging. 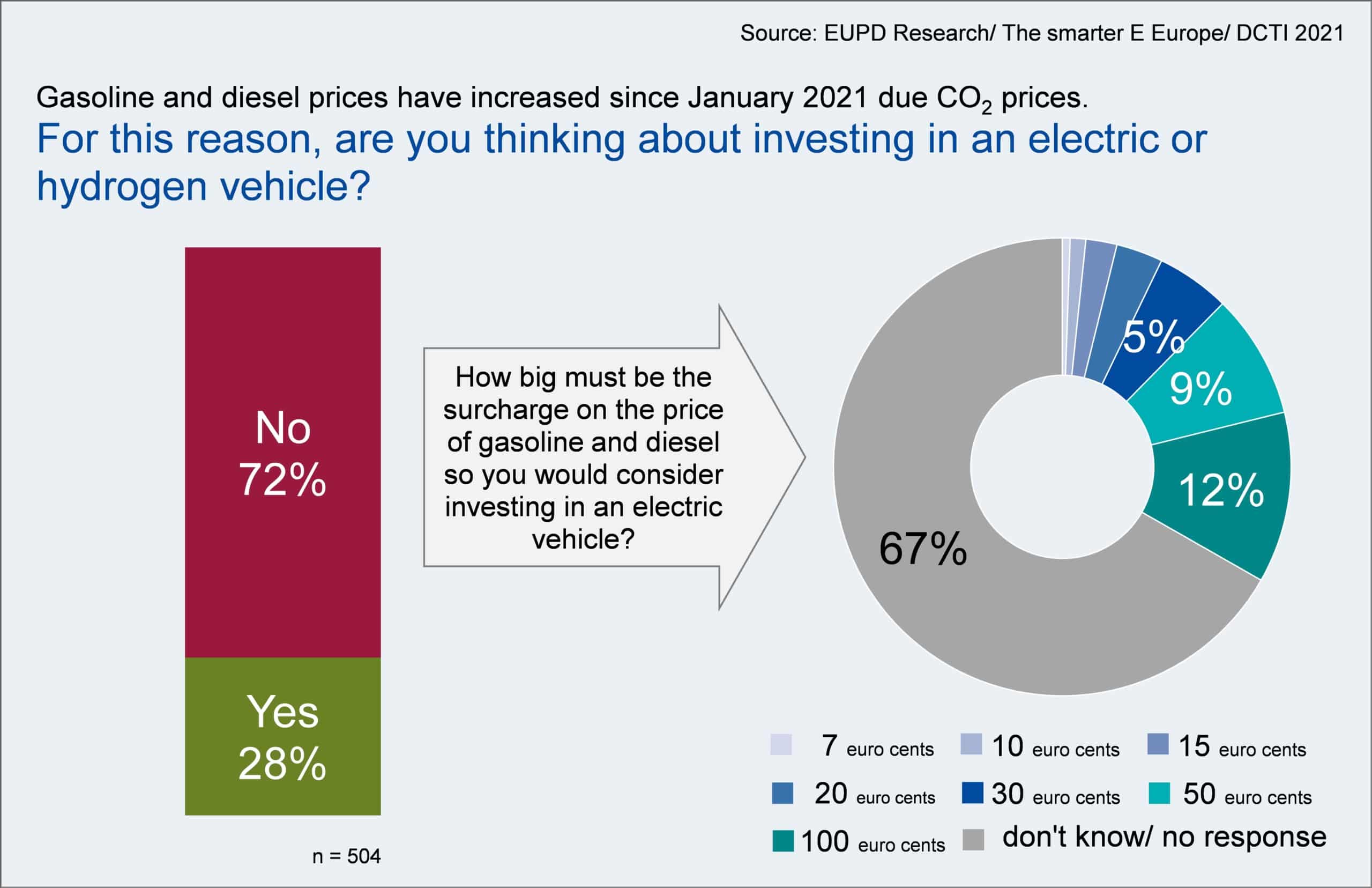 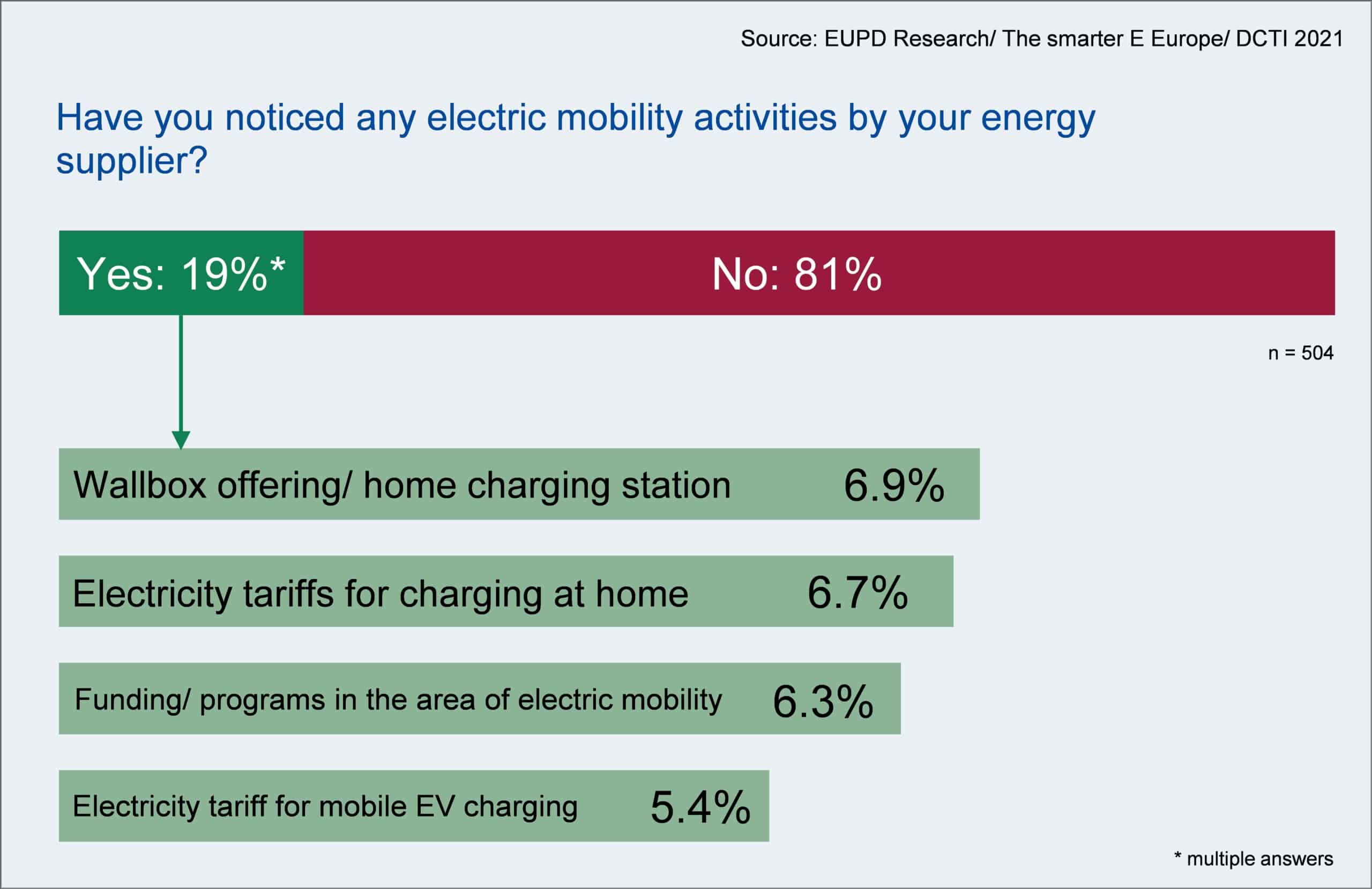 The most innovative energy providers will be honored with the Energiewende Award at the innovation platform “The smarter E Europe“, taking place for the 5th time on July 22, 2021. The Award is addressed to highly engaged energy suppliers, who promote and accelerate the Energiewende (Energy Transition) in the DACH region. The project initiators are the DCTI German CleanTech Institute, The smarter E Europe and EUPD Research. For the third time, this year‘s Energiewende Award is being supported by our partner Vaillant.

Increasing offer of storage solutions in Austria and Switzerland – all surveyed...